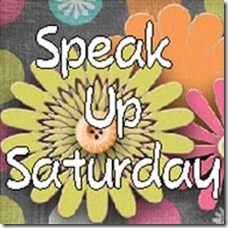 This starts a new feature/meme on my blog. I don’t want my blog to become all reviews, so I’ve decided to only post reviews on Saturdays (unless I’m really pressed on a deadline). So, here’s my first Speak Up Saturday.

The Reading Game is a fast-action memory card game.
It includes a series of six beautifully illustrated storybooks.
The Cards & Books work together to make learning to read exciting and enjoyable.
Game sessions are fun-filled with a winner every few seconds.
After completing the first memory card game, the student has thirty words “hardwired” into memory.
The Skunk story, Book One in the series, is told using only those thirty words.
On completing the series, the student has a reading vocabulary of 180 words.
Almost half of them are among the one hundred most commonly used words in the English language.
The Reading Game was created by “Wordly Wise” author, Kenneth Hodkinson.

Since Kahlen is just at this stage of learning to read, I thought this game would be a perfect supplement to First Step Reading, which has become our main reading program. Kahlen has enjoyed it, but she does get a little frustrated with it, mostly because she can’t move through the words as fast as she would like.

Overall, we have enjoyed this game and will continue to use it as a supplement to our phonics. I think that it can last us all year and maybe even longer than that unless she all of a sudden has a huge jump in her reading ability, which might happen :)

You can purchase the game through their website here for only $24.95. They also have free assessment sheets here for each of the sets of thirty words included as well as the transition sentences that you can use between finishing the card games and having the student read the actual book.

See what other crew members are saying here

Disclosure of Material Connection: I received this product free through The Old Schoolhouse Homeschool Crew. I was not required to write a positive review. The opinions I have expressed are my own.

Memorize Scripture
I review for: